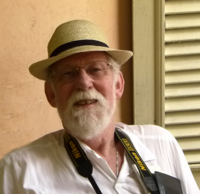 Dr. Jon Sutton Ebeling, Professor Emeritus in Political Science, CSU Chico, passed on July 25, 2022, in Napa, California, after a long struggle to recover from a heart attack during May.

Dr. Ebeling grew up in southern California with the surfers who gave the Beach Boys something to sing about.  There was a movie about one of his fellow surfers, Gidget, based upon a book that her father wrote.  Long after he left Santa Monica Jon occasionally ran into some of his beach friends including Gidget and Tom McBribe.

Jon was born in Queens, New York in 1938 to Beatrice Coulbourne Ebeling and William Ebeling.  After his father passed away in 1939, Jon’s mother brought him and his older brother, Peter, across the U.S., stopping in Arizona first, before finding work as a bookkeeper in Los Angeles.

His high school counselors thought that Jon would make a good sheet metal worker and they steered him into vocational education.  After graduating from Santa Monica High School in 1956, Jon worked for Hughes Aircraft for a couple of years before taking classes at Santa Monica College where he excelled and moved on to San Jose State College.

After graduating from San Jose State in 1962 with a BA in History, Jon joined the Peace Corps.  With Jon’s fluency in Spanish, he expected to go to South America, but found himself on an adventure in Ethiopia.  He spent 2 years in rural Ethiopia working on various Peace Corp projects and teaching high school subjects while learning their language, Amharic. With his gift for language Jon surprised many Ethiopians that he encountered long after returning to the U.S.

Jon returned to the U.S. in 1964 and enrolled at UCLA.  During his last year while training volunteers for Ethiopia and Tanzania he met Dr. David Berlew, director of the Peace Corps in Ethiopia.  After Jon completed his MA in African History at UCLA in 1966, Dr. Berlew convinced Jon to go back to Ethiopia in a staff position.

After two years on the staff in Ethiopia Jon moved to Pennsylvania in 1969 to enter the PhD program at the University of Pittsburgh where he was awarded a fellowship.  Jon received his doctorate in Economic and Social Development in 1974.

In 1971, Jon found a position at Chico State in the Political Science Department teaching statistics and other courses in their undergraduate and graduate programs.  He had many successful students who found jobs in local and state government throughout California, including Mike Thompson who is congressmen for California’s Fifth District.

Jon married Frederica Shockley, a professor in the Economics Department, in 1985.  After he founded Regional and Economic Sciences, both worked as consultants for state and local government.

Jon liked to swim and much to his wife’s surprise, Jon dove in the chilly pool that came with their new house on May 1, 1990.  He also enjoyed bike rides in Bidwell Park behind their house.  Jon was a strong Democrat, active in local and state politics.  He had a wide circle of friends, and he had enjoyed the Wednesday Dinner Club since they began meeting at LaSalle’s in 1980.  Jon helped many students, especially international students. He was a connoisseur of jazz, and he came from a family of artists in Sweden. Jon was a world traveler.

Jon retired from Chico State in 1998, but he continued teaching courses at the University.  For several semesters he taught the terminal course for the completion of the Economics degree, Economics 495.  He also taught a stat class in Recreation Administration.

Jon spent his final days in Napa because that is where one of his very successful students, Wayne Panchesson, runs a retirement community that includes a skilled nursing unit where Jon received the best of care following his heart attack.  “Jon Ebeling is the person who made me the successful person I am today,” Wayne declared while waiting with Frederica to see Jon’s final moments on Earth.