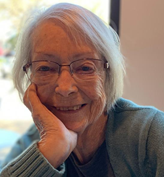 Norma was born on September 26, 1931 in Detroit, MI, to Granville Vernon Redmon and Mary Belle Cheatham. She had an older sister named Margaret to whom she was very close. After their mother passed away when Norma was very young, their father married Norma Clark who was a positive influence in her life.

Norma served in the U.S. Women’s Army Corps (WACs) from 1951 to 1955 as a recruiting officer, and was honorably discharged as a 1st Lieutenant. On February 5, 1955 she married Rohry O. MacNeill, a 1st Lieutenant in the Army. They raised six children and were stationed in some amazing places—Germany, Panama, and Venezuela, to name a few.

Norma earned a Masters degree in Education with Distinction from California State University, Chico (CSUC). She began her successful career as an educator in the K-12 system and completed her journey as the director of the American Language & Culture Immersion (ALCI) program at CSUC where she worked for 18 years. She retired at 65.

Norma was a sojourner to many parts of the world. This gave her a sense of different views and perspectives to which she always kept an open mind along with her open arms and open heart. She welcomed people of all races, cultures, and religions into her home and often fed them and gave them a place to stay.

Being very kind and open-minded, hospitable, and creative, she was a mother to many ALCI students from all over the world. She supported them to overcome challenges to continue their education here in the United States.

To send flowers to the family or plant a tree in memory of Norma MacNeil, please visit Tribute Store
Print
Thursday
30
December