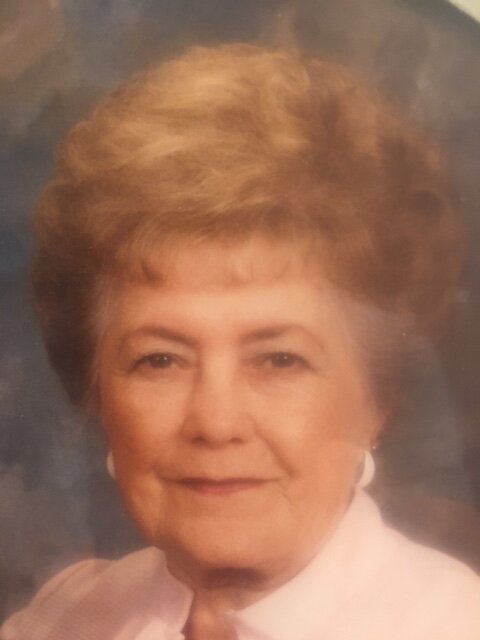 Geneva  Jacqueline (Hux) Dalrymple was born on April 23, 1926 in Ft Worth, Texas to Pearl and Ephraim Hux. Shortly after her birth the family moved to Oklahoma City, Oklahoma. Geneva  grew up with one brother, Spud Hux. Both attended schools in Oklahoma City and Geneva graduated from Capitol Hill High School in 1944.
While still in high school Geneva caught the travel bug, and started traveling to Chico California during summer breaks, to visit her grandma and grandpa, and her aunt and uncle who had previously moved there. Then, following graduation Geneva left Oklahoma City and moved to Chico, initially living with her aunt Ruth and uncle George Vogler.
After moving to Chico Geneva starting working at Osers, but one of her favorite activities was attending the USO dances that were being held at a facility at the Chico airport. It was there that she met and befriended Lois Dalrymple.  Lois was a volunteer at the USO and the primary coordinator of the dances. At that time World War II was still raging, but starting to wind down, and the USO dances in Chico were widely attended.  It was at one of those dances that Geneva met Les Dalrymple. Les was in the Marines and had recently returned from a two year tour of duty on Midway Island. Upon his return from Midway Les was stationed at Camp Pendleton  but his family lived in Chico.
Geneva and Les started a long distance romance.  Les often traveled  from San Diego to Chico on his Indian motorcycle, and occasionally, Geneva traveling to San Diego on the bus to visit Les, and spend time together at the beach. Les left active duty with the marines in November 1945, and moved back to Chico to be near the love of his life. Geneva and Les were married, in a double wedding with his sister Lois and Dick Larsen, on June 16, 1946.
Geneva and Les had two boys, Larry in 1947 and Dale in 1950. Geneva was a great mom, and loved having the boys involved in every activity that interested them—baseball, football, boy scouts, and of course hunting and fishing. They spent many weekends at their cabin on Butte Creek, fishing, gold panning, and sitting around the outside campfire in the evenings. She loved hanging out at the cabin with the family.
It was during this time also that Geneva continued her love of traveling. She and Les took the boys by car  to visit nearly every state in the nation, including Washington DC, as she wanted them to visit all of the historical sites there while they were learning about them in school.
When the boys were in Junior High and High School Geneva worked as a bookkeeper at the Chico Area Recreation District (CARD) office.  After leaving CARD Geneva worked in the student registration office at Butte College.
Geneva loved organizing big events and it was during this time that she started organizing trips to destinations around the world for groups of 20-40 PG&E retirees to visit destinations like Italy, France, and Japan. For these trips she set up all of the air transportation to the destinations, hotels, and ground transportation for the group, plus any side tours that the group was interested in. Geneva and Les went on all of those trips, and in true Geneva fashion, a couple weeks after their return she hosted a BBQ and get together for those groups at her home so that everyone could bring the photos they took and share them with everyone else!
Geneva also volunteered at the Stansbury House in Chico, as she loved showing visitors around the house that was one of the first homes in Chico, and talking to them about the history surrounding the house and Chico.
After college Larry joined the Air Force and ultimately ended up being stationed in Fairbanks, Alaska. As a result, Geneva and Les made many trips to Alaska, by car, motorhome, and by air to visit Larry and his family. While there they got to travel throughout the state, doing a lot of fishing and exploring.
Geneva loved having family and friends gathering at the house on Liberty Lane, especially for birthdays, weddings, anniversary’s, homecomings, etc. , but in her mind it didn’t have to be a special occasion—she just loved family gatherings and barbeques on the large patio, under the walnut tree. It was during those barbeques that Geneva only allowed real dishes, real silverware, and cloth napkins—no paper or plastic tableware for Geneva, no matter how large the gathering!
The love of her life, Les, passed away in September 1999. She missed him dearly but stayed plenty busy as she continued to organize trips for large groups, and having family and friend gatherings at the house.
Geneva was  a devoted wife, a loving mother, grandmother and great grandmother, and a caring friend. She will be greatly missed by all who knew her.
Geneva is survived by her two sons, Larry and his wife Jan,  and Dale and his wife Geri; her grandchildren,  Lora and her husband Tim, Daren and his wife Audrey, and Shonda and her husband Daren; and great-grandchildren, Leslie, Allison, Luke, Emily, Parker, and Paxon. Geneva and Les were called “Grandma and Grandpa” by many others also!
At Geneva’s request there will be no memorial service, however the family will hold a celebration of her life at a later date.  If you wish, donations can be made, “In Memory of Geneva Dalrymple”, to one of Geneva’s favorite Chico charities, The Discovery Shoppe, at 315 Flume Street, Chico, California 95928 (www.discoveryshoppe.com). She very much appreciated the fact that all profits made from donations there went to support many of Chico’s community organizations.

To send flowers to the family or plant a tree in memory of Geneva Dalrymple, please visit Tribute Store
Print
Share A Memory
Send Flowers