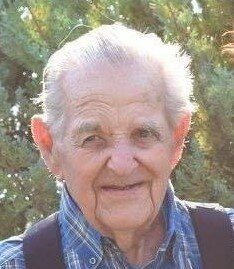 Edwin Charles Akerson passed away in the comfort of his own home with family by his side on July 5, 2022, just 30 days shy of turning 101 years old.

Edwin Charles Akeson was born August 4, 1921 in Chico, California to Frank (Gus) and Minna Akeson. When Ed was only two, Minna passed away in a car accident, leaving Frank unable to care for a small child. Frank asked Carl and Ella Thomsen to raise him alongside their child Ann Thomsen. When he started school his foster parents enrolled him as Edwin Charles Akerson. It wasn’t until after high school that they realized they had been spelling his last name wrong. Instead of changing all the previous records, Ed legally changed it to Akerson.
He met Ruth Naidenne Schmitt at Los Molinas High School where they fell in love. After graduation they married in Reno, Nevada on September 1, 1940, and they had five children to complete their family: Russell E., Linda E., Cynthia L., Edwin L., and James C.

After a 30 year career as the local John Deere service manager, he worked for Louisiana Pacific before retirement. Ed and Naidenne enjoyed retirement by traveling in their motorhome visiting friends and family. He soon grew bored with full retirement, so he worked at Fenn Farms planting and harvesting rice until he was 89. In between seasons they would still travel, and they would spend the summers in Cody, Wyoming with family helping with the custom haying services well into his 90s.

Graveside services will take place at Vina Cemetery at a later date. If you are interested in being notified of the services, please fill out this form: https://forms.gle/acmUgWPxvo7cKgY39

To send flowers to the family or plant a tree in memory of Edwin Akerson, please visit Tribute Store
Print
Share A Memory
Send Flowers