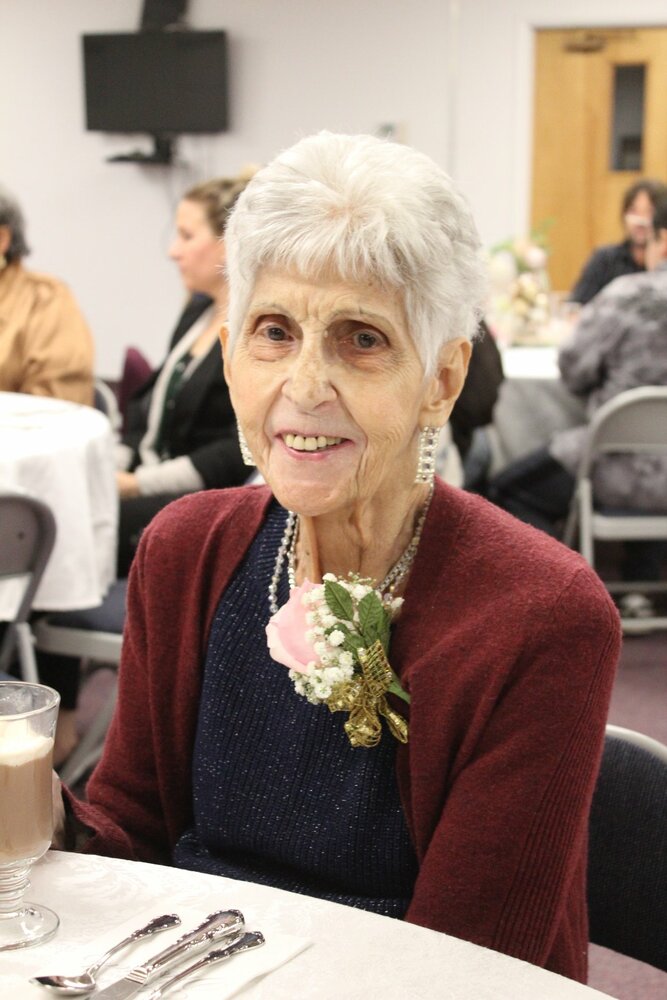 Laura Linhares, along with her twin sister Amelia, were born in Hamilton, Bermuda on February 19, 1926 to Mary and Virginio Furtado Linhares. Laura grew up on the island with her family, which included twelve brothers and sisters.  She loved the ocean, pink sand beaches, and the flowers that grew on the island.  As a teenager, she worked at the military store in Bermuda.  In 1943, she fell in love and married a handsome, red-headed, American, Navy sailor, Robert "Red" Ballinger.  Together they had their first son, Dennis.  As WWII was ending, and while Laura was pregnant with their daughter Shirley, she immigrated to the United States and moved to Chico, California.  Many of Laura’s siblings soon followed her and also moved to the Chico area. Laura and her sister Neves attended night classes and became naturalized United States citizens on May 15, 1951.

“Red” Ballinger was the park foreman of Bidwell Park and he and Laura raised their family in the Park House within Bidwell Park. They welcomed two more sons: Robert (Bob) and Gregory. Laura and Red loved to entertain and often had the whole extended family over for dinners, where elaborate, and often hysterically funny stories were told and all of the family musicians would play and sing together.  When Laura and Red’s children got a little older, Laura began working at Victor Industries as an assembly line worker, where she continued working until retirement.

Red passed away at the age of 49 in 1973.They had been married for a total of 30 years.Though broken-hearted, Laura continued to remain strong, independent, and resilient.

Laura took pride in her appearance, always looking her best.  Everything from her nail polish to her earrings, from her purse to her shoes, looked classy and matched her outfit. She always stayed up-to-date on the latest fashion trends. Many of her granddaughters admired her sense of style and her red Chevrolet Camaro, and referred to her as “the cool grandma.”

In 1985, Laura married Horace Driver and moved from Chico to Paradise, CA. While living in Paradise, she spent much of her time keeping house, gardening, shopping, visiting with friends and her sisters, and decorating her home for each season. (She loved decorating her home for Christmas.)  She continued the tradition of hosting family and friends. One of Laura’s favorite things was having the whole family together, especially all of her “kids,” which now included her children, grandchildren, and great-grandchildren.  She would often give a special treat to each grandchild or great-grandchild when she saw them– whether that be a Tootsie Pop, candy bar, or a $1 bill. She loved her “kids” and made sure to spend time talking to each one of them when they were together. Laura and Horace were married for a total of 31 years until he passed away in 2016.

After Horace passed away, Laura temporarily moved in with Shirley and Ron (her daughter and son-in-law) in Willows, CA. Because of her health needs, Laura later moved into an assisted living facility in Chico, and then to a different care facility in Williams.

Laura left this world for her Heavenly home on October 22, 2022, at the age of 96. She was preceded in death by her parents: Mary and Virginio Furtado Linhares; her 12 siblings: Mary, Manuel, Edith (Eria),Virginia, Mary Odelia, Sally, Virginio Jr, Charles, Amelia (Laura’s twin,) Mary Neves, Adelina, and an infant sister; her first husband: Robert; her second husband: Horace; and two of her children: Shirley and Robert.  She is survived by her two sons: Dennis (Carolyn) Ballinger and Gregory Ballinger; her son-in-law: Ron Cooper; her daughter-in-law: Lynn Ballinger; and multiple grandchildren, great-grandchildren, nieces, and nephews.

To send flowers to the family or plant a tree in memory of Laura Ballinger, please visit Tribute Store
Saturday
5
November

A small reception and potluck will follow at the Eagles’ Lodge, at 1940 Mulberry St.

Share Your Memory of
Laura
Upload Your Memory View All Memories
Be the first to upload a memory!
Share A Memory
Send Flowers