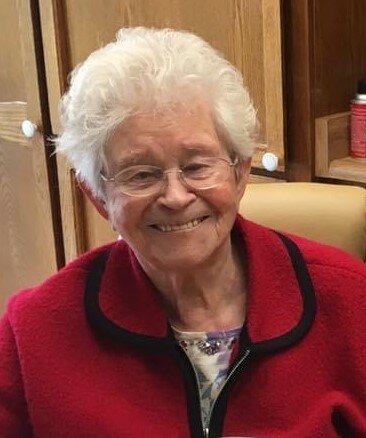 Adriana “Jean” Cornelia Johanna Petronella was born February 23, 1925, at Biest-Houtakker, Noord Brabant, The Netherlands the eldest of five daughters of Leonardus and Cornelia (née Moonen) Van Oirschot. She was grateful for the Anointing of the Sick, responded well to prayer, and passed in Chico, December 27, 2022, at the age of 97 years.

Her father died when she was six, and she became the de facto support of her mother through the years of the depression and occupation during World War II. She gained several diplomas in seamstress work and supplemented the family income that way for several years.

Jean met a nice looking, tall man, Mel Langerwerf – at a dance on January 1, 1944, held inside a bakery in Tilburg (half-way between their respective hometowns). They stood on opposite sides of the room, but soon found dancing to be more fun, and did so for the rest of the evening.

The couple married at St. John the Baptist Catholic church in Goirle, on October 19, 1948. They first lived and worked on a small, rented farm in Eethen, where daughter Rian was born. By 1955 they moved to the town of Dongen, where son Leo was born, and later to the Voldijk, the Langerwerf family farm where Mel and his brother, Kees, farmed together. The drought of 1959 had serious financial reversals for many farmers in Holland, and both Mel and Jean wanted to find a larger operation and go out on their own. Friends came visiting from California and the long-drawn out paperwork was undertaken to emigrate to the US. In March 1961, the family arrived at San Francisco.

Finding work in the town of Napa, Mel was out the door early each day. The children went to nearby St. Apollinaris school, and Jean was left alone in the house. That wasn’t her cup of tea, and although language barriers arose, housekeeping was the same the world over. She soon had five different ladies for whom she cleaned each week – who were gracious to pick her up (driving a car was not yet in the cards for her) and bring her home. An opportunity a year later arose for Mel to get a job with Dutch dairy farmers in Lodi, so a move there, and finally in 1963 to their own rented farming operation in Durham.

Another herd of cows came for sale, with larger accommodations, and a move to Durham Dayton Highway occurred in 1965. The farm grew, the work continued, and she was the bookkeeper, “gopher” and mom, mother-in-law, grandmother, oud-Oma. She stayed active with crafts of many kinds – stitchery, latch hook rugs, hand-knitted sweaters, crocheted blankets, the last of the “leftovers” used for lap blankets at the Veterans home in Redding. She continued to make her home here for the next 56 years until late fall 2021, when she had another fall, and stint in rehab, to move to The Courtyard in February 2022.

She lived life with zest and determination. The latter word exemplified her best to those in the family, and those she met through their moves to the US and Durham.  The couple celebrated their 50th wedding and reception at St. James in Durham in 1998, with nine family members from Holland attending. The couple were also members of the Durham Good Sams club and enjoyed those friendships. The extended family and friends, those friends of her children and grandchildren kept her “in the know.” The staff and friends she made at The Courtyard have blessed her last 10 months enormously.

Funeral Mass will be celebrated at 10 AM, Tuesday, January 3, 2023 at St. James Catholic Church, Durham, followed by a reception. In lieu of flowers, please consider Meals on Wheels of Butte County.

Private family only interment will take place at Durham Cemetery, where she will join Mel who passed in 2000.

To send flowers to the family or plant a tree in memory of Jean Langerwerf, please visit Tribute Store

Share Your Memory of
Jean
Upload Your Memory View All Memories
Be the first to upload a memory!
Share A Memory
Send Flowers