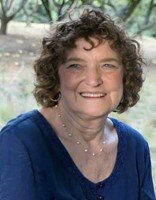 Darlene Ruth Fogleman, 81, beloved wife, mother, grandmother, and great grandmother peacefully passed away on Wednesday, February 23, 2022, at Roses & Ivy in Chico, California surrounded by family. Darlene was born on June 19, 1940, in Oakland, California, the first of four children born to John and Ruth Noppe.  Her parents moved her to Sacramento at a young age and Darlene attended seven different schools in the area before graduating from Sacramento High School where she took college-level courses to train as a bookkeeper.  At the tender age of 18, she took a bookkeeping job with Capital Office Equipment of Sacramento.  It is there that she met a young salesman named Royce who would go on to be her sweetheart.  They were married on August 9, 1959, after a whirlwind nine-month’s long courtship.

In 1966, Darlene moved with her family to Chico where Royce went to work as a salesman at A.B. Dick Products Company of Chico and Darlene went to work for Wentz Markets as a bookkeeper.  Royce and Darlene bought the company four years later and in 2001 they changed the name to Advanced Document Concepts.   It has been a family-owned business for over 50 years.  Darlene eventually left Wentz and went on to be the office manager for Rausser Distributing and Lohse Mills before returning to work with her husband and two of her sons at Advanced Document Concepts in 2005.

Darlene was known for her attention to detail and for her ability to welcome the stranger as if she were a long-time friend.  Darlene’s favorite pastime was bowling.  She joined the Chico Bowling Association in 1981, joined the board in 1985 and was the treasurer for the association from 1985 until 2018 – an amazing 33-year run.  She was elected to the local bowling hall of fame in 1997.  After the death of her husband Royce in 2017, she re-connected with Richard Hill, an old family friend, widower, and rancher in Palermo.  He was her second love, and they enjoyed the last three years travelling, camping, and just spending time together at Richard’s ranch where she would help feed the chickens, goats, and cows.

Darlene is survived by her three sons:   Samuel (Laura) of Birmingham, MI, Michael (Tanya) of Chico, CA., & Christopher (Jeanne) of Chico, CA. She leaves behind 10 grandchildren: Alex, Briana, Carolyn, Stacy, Stephanie, Spencer, Shaun, Shayla, Mathew, and Jenna, as well as 16 great grandchildren. Other survivors include a sister, Dawn, two brothers, Dennis and Doug, and many nieces and nephews. Darlene was preceded in death by her husband, by her parents John and Ruth, and by her stepmother Pat.  Darlene will be missed by many and will be remembered most for her smile, caring ways, and big heart.

Funeral services will be at Brusie Funeral Home, 626 Broadway Street in Chico, CA on Sunday March 6 at 10 o'clock. All are invited to attend. Following the funeral service there will be an entombment at Glen Oaks Memorial Park in Chico, CA. Arrangements are under the direction of Brusie Funeral Home. Please send condolences online at www.brusiefh.com.  Alternatively, you can contribute to St. Jude Children’s Research in her name at St. Judes.

To send flowers to the family or plant a tree in memory of Darlene Fogleman, please visit Tribute Store
Print
Sunday
6
March