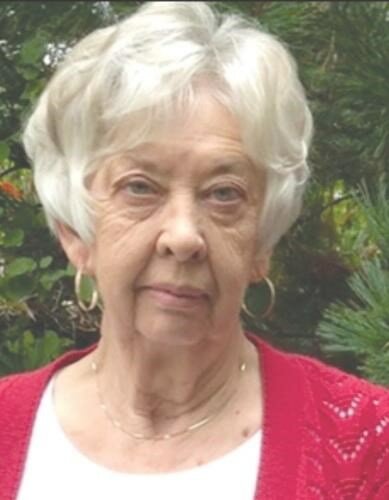 Katherine Gould died on February 27, 2022 at Enloe Medical Center after a long battle with COPD and Heart Disease. Katherine, known as Kathy to family, was born on September 19, 1943, in Rawlins, Wyoming. She was the third of three daughters born to Charlie and Dorothy (Grooman) Gould of Saratoga, Wyoming. She attended school in Saratoga, graduating from high school in 1961 and following in her two older sisters' footsteps as the third Valedictorian in the family. Katherine attended the University of Wyoming and graduated in the spring of 1965.

Following graduation, she enrolled at the University of Illinois where she received a Master's degree in library science. With her degree in hand, Katherine accepted a position at the Library of Congress in Washington DC. She spent the next twenty years of her life there, rising to the position of Manager of the Newspaper & Periodical Reading Room where she oversaw the library's large archive of newspapers from around the country and a valuable collection of old comic books. After her years at the Library of Congress, she realized she was ready for a change. In 1987, she quit her job and moved to Maine to spend a summer working in the kitchen of an inn. The summer turned into fifteen years spent at the Castine Inn, not only spending time in the kitchen but also working as an assistant inn keeper and the only year-round employee. Castine is a beautiful small town on the coast of Maine and the Castine Inn was very special to her. Visits to Maine always involved lobster dinners, trips to Acadia National Park and if it was fall, enjoying the spectacular fall colors.

In 2002 she moved to Chico, California to help care for her mother who had relocated a few years prior from Wyoming. In Chico she quickly became associated with the Chico Branch of the Butte County Library, serving in various volunteer capacities and as a full-time employee. After retiring, she continued to volunteer and most recently was President of the Chico Friends of the Library. Katherine was an extremely creative person with many hobbies that changed throughout the years but always produced superb results.

During her time in Maine, she studied pottery, producing a collection of items still treasured by family members. She also created mussel shell wreaths and detailed pictures made from dried leaves. New babies of family and friends were frequently rewarded with quilts sewn entirely by hand. After moving to Chico, she learned to make baskets from pine needles and in recent years, took coloring to new heights. Many of her intricate designs are worthy of framing. Until shut down by Covid, she directed a weekly coloring group that met at the library.

Katherine is survived by two sisters, Margaret Siemsen of Chico and Mary McIlvaine of Cheyenne, Wyoming. Also surviving are two nieces, Shannon Siemsen Cross of Short Hills, New Jersey and Anne McIlvaine McGee, of Cheyenne, a nephew, Mark McIlvaine of Saratoga and a number of grand nieces and nephews. Given her lifelong love of books and libraries, a donation to the Chico Friends of the Library would be appreciated. A memorial service will be held at the Chico Branch of the Butte County Library on Sunday, March 27th at 2pm. Online condolences can be sent to the family at www.brusiefh.com

To send flowers to the family or plant a tree in memory of Katherine Gould, please visit Tribute Store